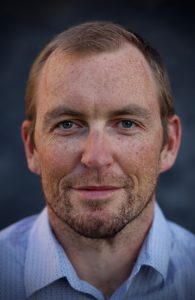 One of the truly major challenges today is to tackle multiresistant bacteria. The World Health Organization (WHO) has recently concluded that multidrug-resistant bacteria pose a grave threat to the progress that modern medicine has made during the last century. The number of multiresistant bacteria is expected to continue to grow, both in terms of infected patients and economic burden on healthcare systems. Therefore, we urgently need to develop strategies that deal with multiresistant bacterial infections, especially for Gram-positive (G+) bacteria, which stand for a majority of the nosocomial (hospital) infections.

Resistance to antibiotics spreads via a process called bacterial conjugation, in where genes move horizontally between bacterial cells, thereby disseminating antibiotic resistance as well as other genes. The protein machinery responsible for facilitating the conjugation are the Type 4 Secretion Systems (T4SSs). These are large protein machineries that highly efficiently transfer DNA and proteins between a bacterial donor cell into a recipient cell, also in between different species (Fig. 1).  T4SSs are thus major contributors to antibiotic resistance transfer in bacteria, including many pathogens that have been identified as being on the rise in nosocomial (hospital) infections worldwide, where they are often involved in different infections and can act as resistance pools. 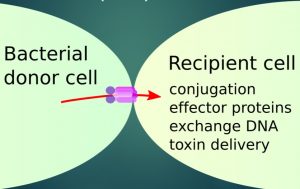 Figure 1. Bacterial conjugation between a bacterial donor and a recipient cell. The transferred DNA, of plasmid or chromosomal origin, is transferred via the T4SS (red box). The system can transfer large sizes of genomic material, up to entire chromosomes.

Initial experiments have shown that targeting T4SS proteins with inhibitors can greatly decrease the bacteria’s survival rate during infections, mainly due to decreasing the transfer of various virulence genes. However, we know very little of the structures and functions of the G+ T4SS proteins that facilitate conjugation. This is due to the fact that only a couple of conjugation model systems have been studied structurally or biochemically, and they have all been of Gram-negative (G-) origin. Since we do not have structural information of any G+ T4SS, we cannot utilise structure based drug discovery to design inhibitors that target G+ systems. This is where this research will contribute, by obtaining high quality structural information of G+ T4SSs.

The adhesion process is crucial during cellular mating. A stable and direct contact needs to be made and kept stable during the entire mating process. Adhesion proteins that are part of gram-positive T4SSs bind to specific parts of the recipient cell. We study this process using both in vitro and in vivo methods to understand how the process occurs and how it is regulated, as well as studying the structure of these proteins using protein crystallography.

The energetic components of the gram-positive T4SSs are responsible both for processing the substrate DNA as well as for providing the energy for the transport of the substrate over the membrane. We study the DNA interaction using various in vitro techniques in order to better understand how the proteins interact both with the DNA as well as with each other.

Structure of the G+ T4SS channel

So far we only have structural data of the actual T4SS channel from a few gram-negative model systems. We take an integrated structural biology approach to study this, by combining X-ray crystallography of individual protein components to cryo electron tomography and single particle analysis of the actual channel.

For more information, please go to CV, Publications or Team.