Elisabeth Sauer-Eriksson is a structural biologist who studies structure-function relationships of RNA-RNA and RNA protein interactions; amyloid formation; and molecular mechanisms of host-pathogen interactions. The aim with the latter project is to aid discovery of new and improved drug candidates for infectious disease pathogens. She uses X-ray crystallography, chemical biology, and in vitro biochemical and biophysical methods for her studies. She is also Assistant Head of the Chemistry Department and examinator of the PhD program. 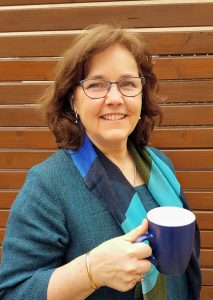 1a) Design of inhibitors for the master regulatory protein PrfA in Listeria monocytogenes.

Due to increased antibiotic resistance, new types of antibacterial agents are urgently needed. An alternative to the classical type of antibiotics are drugs inhibiting specific virulence properties of pathogenic bacteria. Almost all virulence genes in the human pathogen L. monocytogenes are controlled by the transcriptional activator PrfA, a member of the Crp/Fnr family of regulators. Jörgen Johansson and Fredrik Almqvist, from UmU, have identified ring-fused 2-pyridone molecules that, at low micromolar concentrations, attenuate L. monocytogenesinfectivity by reducing the expression of virulence genes, yet without compromising bacterial growth. These inhibitors bind PrfA and decrease its affinity toward the consensus DNA binding site. Our structural characterization reveals that the lead inhibitor binds within a hydrophobic pocket located between the C- and N-terminal domains of PrfA where it interacts with residues important for PrfA activation (Fig. 1, Good, et al, Cell Chem Biol. 2016,23(3):404-14.). Modified ligands are now being synthesized, tested for improved antivirulence properties, and subjected for structural studies. The PrfA-inhibitor structure is furthermore an excellent basis for our on-going investigation of other members of the Crp family as targets for antivirulence based therapeutics. 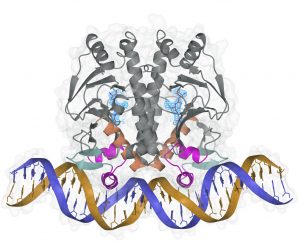 1b) Structural basis for glutathione-mediated activation of the virulence regulatory protein PrfA in Listeria.

It had been proposed that glutathione (GSH) could fulfill the function of PrfA activation. We determined the crystal structures of PrfA in complex with GSH and in complex with GSH and its cognate DNA, the hly operator PrfA box motif (Fig.2). Combined these structures reveal the structural basis for a GSH-mediated allosteric mode of activation of PrfA in the cytosol of the host cell (Hall et al., 2016 PNAS). More studies are pursued to further elucidate the molcular mechanism behind PrfA activiation

In this project we aim to understand the structural basis for trans-acting riboswitches’ control of the expression of PrfA in Listeria. The project is carried out in close collaboration with Prof. Jörgen Johansson at the Molecular Biology department at Umeå University.

2) Amyloid-forming proteins
Transthyretin (TTR), Amyloid-beta-peptide, and medin are three examples of amyloid-forming protein, which we study in the lab. They belong to a group of over 20 proteins that to cause disease by the formation of insoluble fibrils called amyloids. The human tetrameric thyroid-binding protein TTR is associated with two medical disorders: familial amyloidotic polyneuropathy (FAP) caused by mutations within the protein, and senile systemic polyneuropathy (SSA) that involves the native protein. FAP is prevalent in the northern parts of Sweden, where it is sometimes also referred to as “Skelleftesjukan”. Amyloidosis involves structural changes within the amyloidogenic protein. We have recently characterized the 3.2 Å cryo-EM structure of the 2-protofilament fibril of human TTR purified from the vitreous body of the eye of a FAP patient. Hopefully this knowledge will  help identification of substances that can inhibit the formation of TTR amyloid, or substances that brake up already formed fibrils. 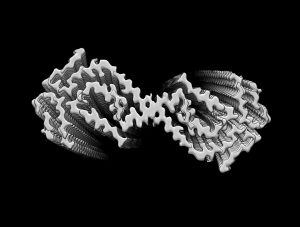 3) The signal recognition particle (SRP)
SRP is a RNA-protein complex needed for the transfer of proteins through the endoplasmic reticulum in eukaryotic cells and plasma membranes in prokaryotic cells. It is absolutely essential for survival and found in all three kingdoms of life. We have made steadily progress toward the elucidation of structural states of SRP in assembly and function. In recent years we solved structures of the SRP RNA in its free form as well as in complex with its different protein partners. Together with a number of other structures of various SRP proteins, these structures provide new insights into the mechanisms of SRP activity, leading toward a better understanding of protein trafficking by this elegant pathway.